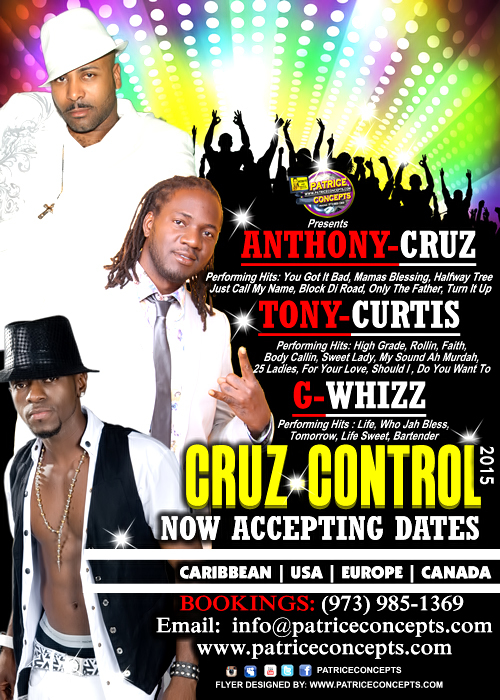 Tony Curtis sentimental tone and immaculate clarity, perfectly smooth phrasing over any rhythm is indicative that he is one of the genres brightest star. His greatest hits include Faith, 18 Yards, High Grade, Butterfly/Real Thing/My Sound Ah Murda featuring Jigsy King, Body Calling, Rollin, 25 Ladies, Sailing, If You Were Here, 6Mths/8days/12hrs, For Your Love, Question Sign, My God is Real, Stronger, Jah I Thank You, Do You Want to, What A Feeling featuring Machel Montana, “Missing You” in combination with ARP and Beenie Man. Tony Curtis is also a member of reggae quartet L.U.S.T (Lukie-D, Thriller-U, Singing Melody & Tony) who toured JAPAN last year. After almost 2 decades in the music business, 7 studio albums, a string of collaborations, reggae singer Tony Curtis releases “FIGHT IT” EP on GreenYard Records 10/25/11 via ITUNES. The label is operated by Zigo from French group Dub Inc. The 5 Track album is a fusion of modern roots and neoclassical dancehall featuring dancehall icons, Cutty Ranks and Burro Banton. Logon to www.tonycurtismusic.com

ANTHONY CRUZ is a singer, songwriter, producer, nephew of reggae singer “GARNET SILK” and his soulful voice and classy attire have many people referring to him as one of the most charismatic entertainers. He is also the recipient of the 2006 Reggaesoca Music Award for Best Reggae Combination “Too Bloody” featuring Grammy Winner Buju Banton and 2012 Nominee for the (British Reggae Industry Awards) Best International Male Reggae Artist. After five successful years at 5th ELEMENT RECORDS with label mates Richie Spice & Chuck Fender, he departed in September 2005 and launched his independent recording label, Shanshan Music with popular singles such as “Never Too Much” featuring BEENIE MAN, “Burn Dem” featuring CAPLETON and “I Won’t Wait” by LUCIANO. His hit songs include Mama’s Blessings, You Got It Bad, Turn It Up, Half Way Tree, No Gun a Dance, Woman I Love, Woman 24-7, Just Call My Name, Lose Dem Head, ‘People Ballin’ on the truths & Rights riddim for NYC Hot 97 Bobby Konders (Massive B Label), Respect, Dem Block The Road, You’ll Think Of Me and Only The Father. His 4th studio album “CRUZ CONTROL” was released on his own Shan Shan Music label and is available at Amazon and ITUNES! Logon to www.anthonycruzmusic.com

GWHIZZ gained international notoriety with the smash hit “LIFE” produced by TJ Records; winning Carivibez.tv 2009 Webby Award for Best Breakthru Video & the 2010 EME AWARD for “Best New Artists.” Finding the formula to do a follow-up hit and breaking down musical barriers, can be difficult for a young artist, but G Whizz is an exception as indicated with club songs “Feel It”, “Diamonds & Pearls” and “OMG”, the Usher refix. His debut album “LIVE LIFE & LOVE IT” was released in Japan 2011 and he embarked on a successful Japan Summer tour attracting crowds in excess of 3000. The album includes Life, Tomorrow, Better Soon Come, On & On, Weekend Anthem, Whether Night or Day, Mi Goal, Jah Put A Shield and “Who Jah Bless” which made history on Japan I-Tunes for most downloads in one week! In 2011 he released “Bartender” which peaked at number 2 on MTV Dancehall Charts and is nominated for Carivibez TV 2012 Webby Award for “INTERNATIONAL VIDEO OF THE YEAR.” His latest single Life Sweet is creating major waves! Logon to www.facebook.com/gwhizzdat